Quo Vadis – or Déjà vu All Over Again, or are metalworking fluid compounders, managers, and end-users once again being thrown to the lions? 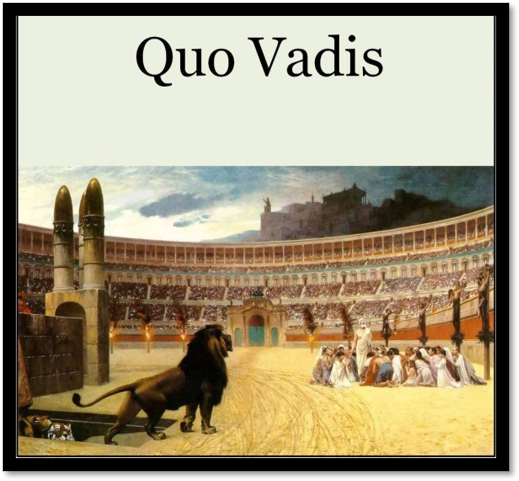 A decade ago, the U.S. EPA’s Office of Pesticide Programs (OPP) issued their Reregistration Eligibility Decision (RED) on the most commonly used formaldehyde-condensate microbicide – triazine. In the triazine RED, the EPA limited the maximum permissible active ingredient concentration in end-use diluted metalworking fluids (MWFs) to 500 ppm (0.5 gal triazine per 1,000 gal MWF). Before the 2009 RED was issued the maximum permitted triazine concentration was 1,500 ppm (1.5 gal triazine per 1,000 gal MWF). Triazine is generally ineffective at 500 ppm, so the RED limited triazine use to ineffective concentrations. Now EPA has started along the same path with isothiazolinones – the use of which increased substantially as MWF compounders scrambled to find substitutes for and supplements to triazine. In this post I report about EPA’s isothiazolinone risk assessments and discuss their potential implications. At the end of this article I have provided a call to action. The U.S. EPA’s comment period will close on 10 November 2020. If you want to be able to continue to use isothiazolinones in MWFs, write to the U.S. EPA and let them know of your concerns. If you do not take the time to write now, you will have plenty of opportunity to be frustrated later.

In February 2009, in their RED for triazine (hexahydro-1,3,5-tris(2-hydroxyethyl)-s-triazine), the OPP limited the maximum active ingredient (a.i.) concentration in metalworking fluids (MWF) to 500 ppm1. Triazine is a formaldehyde-condensate. This means is manufactured by reacting formaldehyde with another molecule – in this case, monoethanolamine at a three to one ratio (there are other formaldehyde-condensate microbicides produced by reacting formaldehyde with other organic molecules).

Formaldehyde is a Category 1A (substance known to have carcinogenic potential for humans) carcinogen2. EPA’s decision makers believed – contrary to the actual data – that when added to MWFs, triazine completely dissociated (split apart) to formaldehyde and monoethanolamine. In drawing this conclusion, EPA ignored data showing that in the pH 8 to 9.5 range typical of MWFs, there was no detectable free-formaldehyde in solution. They ignored data from air sampling studies that had been performed at MWF facilities3. They misread a paper that reported that triazine was not effective at concentrations of less than 500 ppm4. Triazine was to have been the first formaldehyde-condensate microbicide RED – to be followed with REDs for oxazolidines and other formaldehyde-condensates. Determining that it was not financially worth their while to develop the additional toxicological data that the U.S. EPA was likely to request, several companies who had been manufacturing formaldehyde-condensate products withdrew their registrations. Consequently, with their decision to reduce the maximum concentration of triazine to 500 ppm, the U.S. EPA effectively eliminated most formaldehyde-condensate biocide use in MWFs. I have discussed the implications of this loss elsewhere5 and will not repeat the tale here.

The first isothiazolinone microbicide – a blend of 5-chloro-2-methyl-4-isothiasolin-3-one (CMIT) and 2-methyl-4-isothiazolin-3-one (MIT – I’ll use CIT/MIT to represent the blend) – was introduced into the metalworking industry in the late 1970s (Figure 1). The original manufacturer – Rohm & Haas – knew that the product was a skin sensitizer (caused an allergic action on the skin of susceptible individuals) and took considerable efforts to educate users on how to handle the product safely. Moreover, CIT/MIT had already been in use as a rinse-off, personal product preservative, before it was marketed for use in MWFs. In the past decade, dermatitis complaints from CIT/MIT and MIT preserved personal care product users has received considerable publicity. All FIFRA6 registered pesticides are subject to periodic reviews – including risk assessments (hazard characterizations) and Reregistration Eligibility Decisions (REDs). Various research reports and toxicological studies are reviewed as part of U.S. EPA’s hazard classification process, but there is no indication that the actual incidence of adverse health effects is considered. 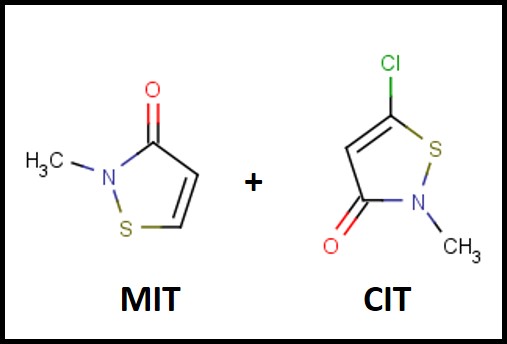 Fig 1. The chemical structures of the MIT and CIT molecules in the first isothiazolinone blend marketed as a microbicide for use in MWFs.

In April and May 2020, the U.S. EPA issued Registration Review Draft Risk Assessments for six isothiazolinones (Its). The CIT/MIT and MIT assessments were provided in one document, thus there were five risk assessment reports plus the hazard characterization. I have listed these in Table 1.

Note a – DCOIT is not approved for use in MWFs. Consequently, I won’t mention it in the rest of this post.

Despite toxicological data to the contrary (have you read this phrase before?), EPA chose to evaluate all ITs together – based on their putatively similar structural and toxicological property similarities. The best news is that none of the IT-microbicides were found to be either carcinogenic or mutagenic. However, as a class, they were designated as Category I (corrosive) for eye irritation and Category I (corrosive) for skin irritation (except for BIT – which was classified as non- irritating – Category IV). Moreover, the risk assessments used results from laboratory studies to identify Points of Departure (POD) for inhalation and dermal health risks. A POD is a point on a substance’s dose-response curve used as a toxicological reference dose (see Figure 2). For the IT risk assessments, the POD was the LOAEL – the lowest observable adverse effect level).

Each risk assessment discussed the different types of exposure relevant to each IT end-use applications and types of users – i.e., residential handlers – adults and children, commercial handlers, machinists, etc. Exposures related to MWF-use were addressed as a separate category. For inhalation and dermal exposures, respectively level of concern (LOC) and margin of exposure (MOE) were considered. The isothiazolinone LOCs were their PODs. The MOE is the ratio of the POD to the expected exposure. If MOE ≤ LOC, it is considered to be of concern. If MOE > LOC, it is not of concern.

Fig 2. Toxicity test dose response curve. LOAEL is the lowest observable adverse effect level. NOEL is the no observable effect level. The linear model assumes that the NOEL is always at test substance concentration = 0. The biological model recognizes that most often NOEL is at a concentration >0. Dose can be a single exposure (for example, 1.0 mg kg-1 of test organism body weight) or repeated exposures (for example 0.1 mg kg-1 d-1). Response depend on what is being observed (skin irritation, lethality, etc.).

Table 2 summarizes the MWF inhalation MOE determinations from the five isothiazolinone (IT) risk assessments. These determinations are based on unsubstantiated assumptions. 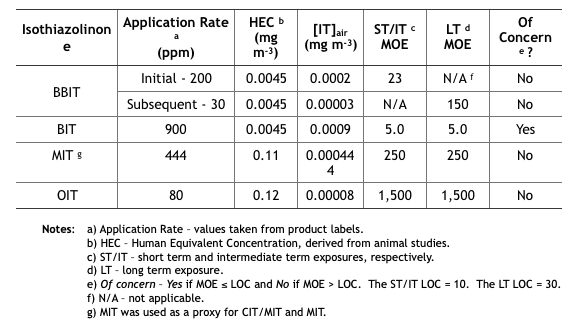 Table 3 summarizes the MWF dermal MOE determinations from the five isothiazolinone (IT) risk assessments. These determinations are based on the same unsubstantiated assumptions used to determine the inhalation MOEs. 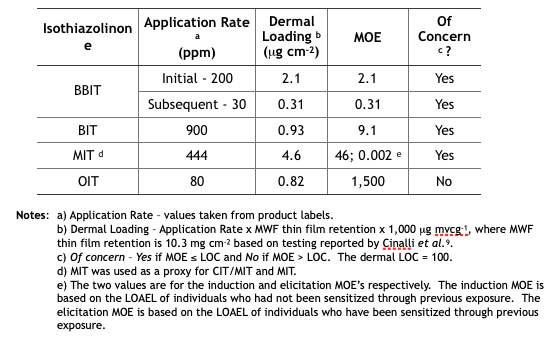 Future Reregistration Eligibility Decisions (REDs) – as with triazine, EPA will use the risk assessments as the basis for the respective isothiazolinone (IT) REDs. The agency will most likely restrict end-use concentrations to levels that ensure Margins of Exposure (MOEs) are greater than Levels of Concern (LOCs). The only IT not likely to be affected is OIT. Its inhalation and dermal MOEs are in the not of concern range. In contrast, BIT’s inhalation and dermal MOEs are both of concern. We can anticipate that the EPA’s BIT RED will limit the maximum concentration in end-use diluted MWFs to a level that will ensure that both MOEs are greater than the respective LOCs. We can also anticipate that the maximum permitted BBIT, CIT/MIT, and MIT concentrations in end-use diluted MWFs to be reduced so that the dermal MOE is greater than the dermal LOC. With an elicitation MOE = 0.002 for CIT/MIT and MIT, it is possible that EPA will simply prohibit their use in MWFs.

Economics – The 2012 Kline specialty biocides report10 projected that by 2017, 117,000 pounds of IT-microbicides would be used in MWFs in the U.S. (Table 4). In particular, BIT use has increased as a stand-alone microbicide and an active ingredient blended with one or more other active ingredients (for example BIT + triazine, BIT + sodium pyrithione, and BIT + bromo-nitro- propanediol – BNPD). The fate of these formulated microbicides could be affected by the new BIT RED.

Table 4 Projected, 2017, IT-Microbicide Demand for Use in MWFs (from IT product US EPA Risk Assessments). 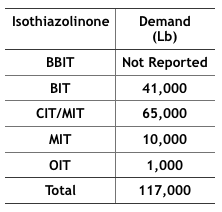 If effective microbicides cannot be used to protect MWFs against microbial contamination a number of possible scenarios are likely to unfold. In the first, MWF functional life will be severely reduced. Systems that have been running for years without a need for MWF draining, cleaning, and recharging (D, C, & R), are likely to require D, C, & R multiple times per year. This will increase MWF and waste treatment/handling costs. In the second, MWF-compounders will modify their formulations to include molecules that are toxic but do not have pesticide registration. This potentially increased the health risk to machinists and other workers routinely exposed to MWFs. A third would be the increased use of biostable functional additives. The list of biostable functional products has grown substantially over the past two decades and is likely to accelerate as effective microbicide availability continues to shrink. Many currently available synthetic MWFs are quite resistant to microbial contamination. However, they are not suited to all metalworking applications. New applications research, using recently developed functional additives could close this applications gap. A fourth possibility is that MWF-compounders will try to adopt the intentional bioburden model used by one compounder. One MWF product line supports an apparently benign bacterial species whose presence seems to inhibit the growth of potentially damaging (biodeteriogenic) microbes. All of these scenarios translate to increased cost.

Health Issues – On countless previous occasions, I have discussed the potential health issues associated with uncontrolled microbial contamination (for my most recent paper – co-authored with Dr. Peter Küenzi – go to: tandfonline.com. There is some evidence that conventional mist collectors do not do a great job of scrubbing bioaerosols from plant air. MWF bioaerosols are whole cells and cell parts that come from the recirculating fluid and system surfaces. They cause or exacerbate allergenic and toxigenic respiratory disease. If MWF bioburdens cannot be controlled, MWF bioaerosols are likely to pose an increased worker health risk.

Problems with the U.S. EPA’s Isothiazolinone Risk Assessments and Call to Action

Dr. Adrian Krygsman, of Troy has prepared talking points for industry stakeholders. I have previously had Dr. Krygsman’s talking points broadcast to ASTM E34.50 members and STLE metalworking fluids community members. I am copying it below in its original form:

A. General Comments on Approach:

Please send your comments and questions about this blog post to me at: fredp@biodeterioration-contol.com.

2 IARC Monographs on the Evaluation of Carcinogenic Risks to Humans Volume 88 (2006), Formaldehyde, 2-Butoxyethanol and 1-tert-Butoxypropan-2-ol. https://publications.iarc.fr/106

8 Biocide demand is the sum of all factors that decrease a microbicide’s concentration in a treated MWF. These factors include the microbes to be killed, chemical reactions with other molecules present in MWFs, evaporation (for volatile microbicide molecules), transport in MWF mist particles, drag-out, and dilution.