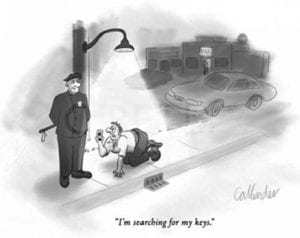 Are we like the drunk who looks for his keys under the lamppost (if you don’t now this shaggy dog story, he had dropped them in the nearby dark ally, but chose to look where there was more light…)?

In my last What’s New post I quoted Daniel Kahneman: “What you see is all there is (WYSIATI).”  In this post I’ll explore the concept a bit further.  First, I will review some of the essential concepts I’ve covered in my three most recent, previous posts.  Apropos of EPA’s observation that at 83% of the fuel retail sites with moderate to severe corrosion, the owners were unaware of the problem.  That’s like saying that 83% of people with moderate to severe heart disease are unaware of their condition (there is a reason that heart disease is called the silent killer).  These folks simply walk around like heart attack time bombs; confident that they are not at risk – until the moment they collapse and must be rushed to the hospital.  In the case of heart disease, there is a considerable amount of public outreach to help educate people about the importance of routine health examinations.  These examinations are performed to detect incipient disease and to identify actions that can be taken in order to reduce the risk of the disease causing major health issues.

Effective condition monitoring programs serve the same purpose.  In the manufacturing world, asset-value based predictive maintenance (PM) is the currently accepted best practice.  PM is based on the proven return on investment from timely and effective condition monitoring that drives equally timely and effective maintenance actions in order to maximize equipment performance and performance life.  Unfortunately, this approach is not broadly embraced within the petroleum retail community.  What we generally accept as condition monitoring focuses on detecting damage after it has occurred: WYSIATI – until we see damage, we assume that it can’t exist.  In my Microbial Damage – Part 2, What’s New post I discussed the effect of collecting the wrong type of sample.  In may last post, I compared the ability of different types of microbiological tests to detect microbial contamination when it was present in the sample.

In the fuel retail sector, we have a tendency to wait until we have had a failure (perhaps as minor as a broken well-cover, or as major as a leaking UST), a tendency to collect the most convenient sample rather than the one most likely to harbor microbes (like looking for our keys under the lamppost, where there is light, instead of in the dark ally, where we dropped them), and we tend to use a microbiological test method (culture testing) that has been around for nearly a century (remember, culture testing is unlikely to detect more than 0.1% of the microbes present in any fuel-system sample).  We then feel confident that our fuel systems are risk-free.  Here is today’s take home lesson: negative (below detection limit) microbiological test results provide much less information about contamination than do positive results.

So how do we design fuel system predictive maintenance programs that provide a high return on investment?  I’ll offer some thought about this in my next What’s New post.  In the meantime, if you’d like to learn more, reach out to me at fredp@biodeterioration-control.com. 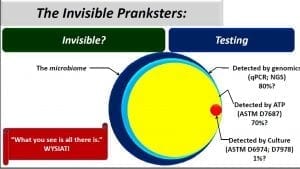 I’m starting this post with an illustration from one of my recent presentations (click on the image to enlarge it). The quote is from Daniel Kahneman’s book: Thinking, Fast and Slow. It reminds us of how often our perceptions are much more limited than we realize. Let’s turn to the circles to the right of the quote.

END_OF_DOCUMENT_TOKEN_TO_BE_REPLACED

In his 1967 book, “The Use of Lateral Thinking” Edward di Bono introduced the concept identified in the book’s title. He contrasted “lateral thinking” against “linear thinking” and argued that successful resolution of any challenge required both types of thinking. What does this have to do with detecting microbes in fuel systems. Standard Practices, such as PEI’s RP900 “Recommended Practices for the Inspection and Maintenance of UST Systems”, are examples of excellent linear thinking. They prescribe a series of steps for performing UST system condition monitoring. Similarly, ASTM D4057 “Practice for Manual Sampling of Petroleum and Petroleum Products” provide a wonderful, linear sequence of steps for collecting fuel samples. Neither of these documents promotes lateral thinking. RP900 is great at detecting component failures once they occur. Similarly, D4057 is great for obtaining samples on which to run tests to determine whether the product is in specification. In contrast, ASTM D7464 “Practice for Manual Sampling of Liquid Fuels, Associated Materials and Fuel System Components for Microbiological Testing” encourages lateral thinking. It encourages users to ask: “what do I intend to do with my sample” and “if I want to detect microbial contamination, what kind of sample do I need to collect; from where should I collect that sample?”
Samples collected per D4057 are unlikely to contain microbes. Consequently, they are not the samples on which it makes any sense to test for microbial contamination. This is the number one reason microbial contamination in fuel systems remains undetected even after the bugs have caused component failure. Microbes need free-water to thrive. Free-water accumulates as condensate on tank surfaces – particularly in the headspace, above product, and on the tank bottom, below product. A substantial volume of free-water is also trapped within slime that accumulates on tank walls. Linear thinking guides us to collecting UST bottom-samples from fill-lines. Lateral thinking helps us to consider alternative sampling points and sample types. If you are interested in learning more about sample collection for microbiological testing, contact me by phone (609.716.0200) or email (fredp@biodeterioration-control.com). In my next blog post, I’ll discuss microbiological test methods.