REMEMBERING A MENTOR AND A MENSCH – PROFESSOR EUGENE D. WEINBERG 1922 TO 2019

This morning, while reading the Fall 2019 issue of Indiana University Alumni Magazine, I was saddened to read Gene Weinberg’s name in the list of recently deceased IU faculty and staff.
Professor Emeritus Eugene D. Weinberg died on 08 March – less than a week after having celebrated his 97th birthday. Gene was the first academician to have had a profound effect on my life’s path. I know that his memory will be a blessing to all of us who had the privileged and pleasure of knowing him.

I first met Professor Weinberg in 1966 – a few weeks into my first semester at IU. My initial plan was to have been a math major, but within a month, I began to rethink that plan. Having been tinkering with microbiology since my parents made the mistake of presenting me with a microscope for my eighth birthday, I decided to explore the possibility of changing majors to microbiology. In late October 1966, I visited with Professor Weinberg in his Jordan Hall office to explore my options. He advised me that the courses that I was taking were perfectly aligned with those that would be part of a microbiology major. He contacted my original, math department advisor and agreed to become my faculty advisor. From that date through my graduation in June 1970, Gene was always available to offer guidance and to facilitate my efforts to perform extracurricular studies under various Microbiology Department professors. Although I never saw it, I have no doubt that Gene’s letter of recommendation helped me to get accepted into graduate school and receive a full fellowship for my studies at University of New Hampshire.

Gene’s research interest was in medical microbiology. Knowing that my passion was microbial ecology, while I was taking his course in Medial Microbiology, he encouraged me to make my class project ecologically focused. When I went home for Thanksgiving, 1968, I took a suitcase full of sterile, 100 mL glass bottles with me. One the Friday after Thanksgiving, I drove to the Delaware River’s source. From there, and at various bridges located at 50 mi intervals – ending at the Delaware Memorial Bridge, I used a fishing pool, jury-rigged sampling setup to collect samples from each bank and the middle of the river. I then carried the full bottles back to Bloomington (good thing this was before there were suitcase weight limitations or TSA) where I proceed to run culture tests and biochemical taxonomic profiles on each type of microbe that I had detected. I rationalized this survey effort by noting that there was a possibility that the taxonomic profiles along the river’s length might have been indicative of public health risks.

I didn’t realize it at the time, but that project marked the start of my career as a microbial ecologist. I did realize from the outset that Gene was a supportive, encouraging mentor. When others might have said: “you can’t do that!” Gene would always tell me that I had a great idea, asked me if I had thought about various details – which of course I hadn’t, and suggest research papers that might help me to refine my thoughts. Gene was one of perhaps four mentors whose influence shaped my career as a microbiologist. I feel most fortunate for having known him and have benefited from his wisdom, his kindness, and his mentorship.

You can find Gene’s full obituary article at https://www.hoosiertimes.com/herald_times_online/obituaries/eugene-weinberg-phd/article_f86ed715-7dde-5789-9916-40d1e0fb0bfe.html.

What samples are most useful for microbiological testing?

Earlier this week a colleague asked me to prepare a short piece about collecting samples from fuel systems when the intention was to perform microbiological tests. My initial response was to refer her to ASTM Practice D7463 Manual Sampling of Liquid Fuels, Associated Materials and Fuel System Components for Microbiological Testing and my recently published chapter on sampling in ASTM Manual 1, 9th Edition. My colleague responded that she was really looking for a two-page summary that she could share with her customer who wanted to monitor their fuel systems from microbial contamination. Today’s post provides that summary.

Microbiological sampling is unique in that the objective is to capture a sample from a location that is most likely – within a fuel system – to harbor microbes. Our intent is to diagnose the risk of microbes causing damage (biodeterioration) to either the fuel or fuel system. This is in stark contrast to the more common objective of collecting a representative sample – one that we can use to determine whether the product is fit for its intended use. Consequently, I use the term diagnostic to differentiate microbiology samples from fuel samples.

What is an interface?

Interfaces are zones where two or more components of a system come into contact with one another. Figure 1 illustrates the interfaces found in fuel systems: 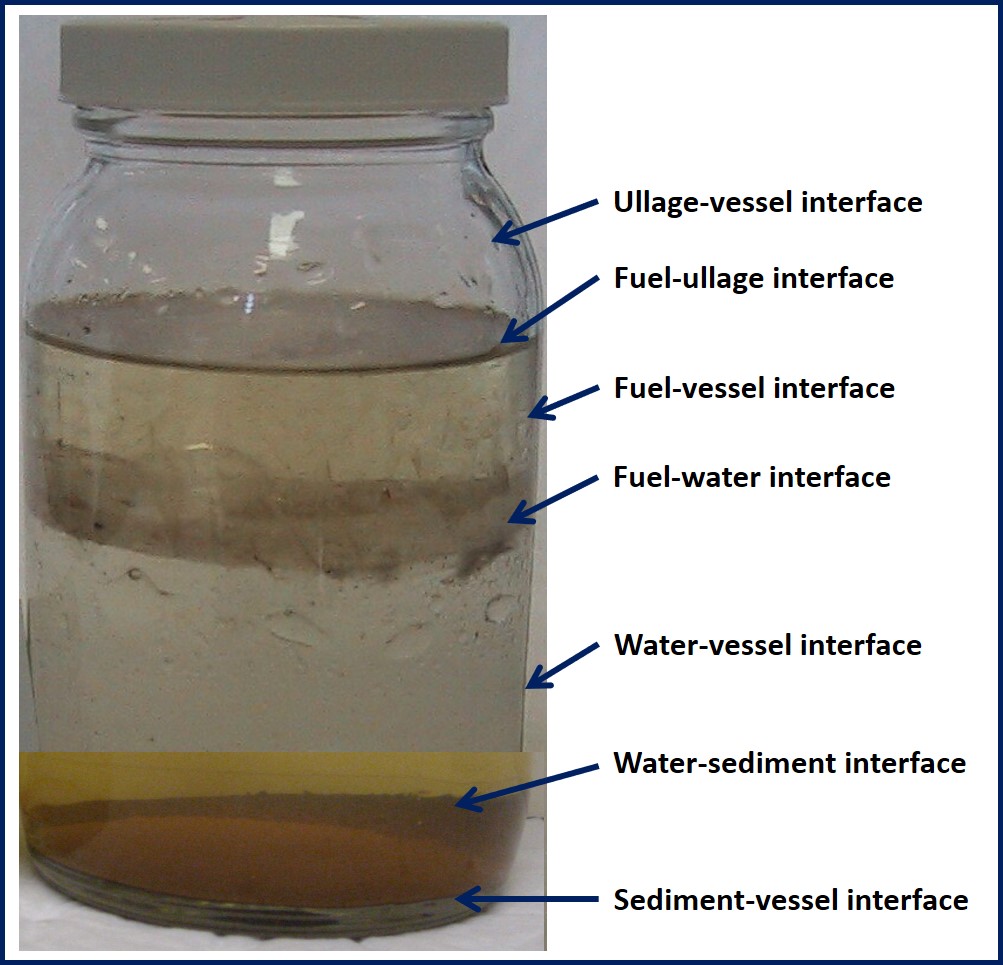 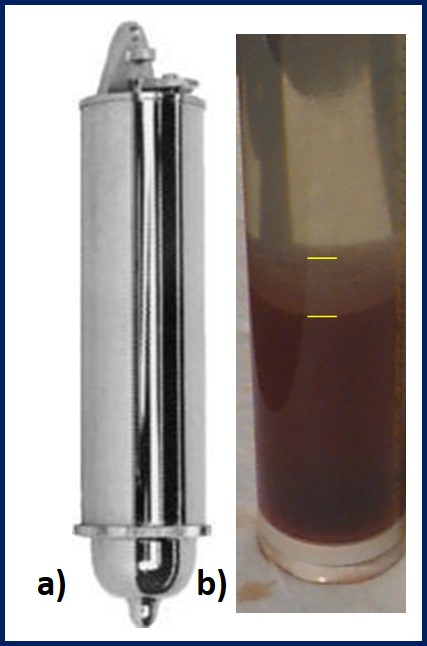 Best practice is to keep samples chilled (40  2 F; 5  1 C) and to begin microbiological testing within 4h after collection Fuel & Fuel System Microbiology Part 6 explains sample perishability. Samples that have been kept chilled can be tested reliably for up to 24h after collection. The total level of microbial contamination and types of microbes present in the sample are increasingly likely to change as sample age beyond 24h. This makes the test results less likely to reflect conditions inside the tanks from which the sample was originally collected. Consequently, the risk of either failing to detect heavy microbial contamination or incorrectly concluding that actually had negligible contamination when sample was heavily contaminated, increases with sample aging. Microbiological tests like ASTM Method D7687 for ATP are easy to run in the field, immediately after sample collection. Using this type of test eliminates the risks caused by sample aging.

This brief explanation of sampling procedures will get you started on the right path. However, circling back my opening comments, I recommend using ASTM Practice D7464 for detailed, step-by-step sampling instructions, and referring to my sampling chapter in ASTM Manual 1 for a full discussion of the considerations that should be taken into account when deciding when and when to collect samples for microbiological testing. I also address sampling in considerable detail in BCA’s six-module fuel microbiology course. For more details about this course, please contact me at either fredp@biodeterioration.control.com or 01 609.306.5250.

Beginner’s Mind – What does this have to do with fluid management?

In the June issue of Lubes’n’Greases, Jack Goodhue wrote a an article about the Zen concept – shoshin – beginner’s mind.  Normally a fan of Jack’s Your Business column, I was surprised by how far off the mark he was in his understanding of shoshin.  I wrote a letter to the editor to express my concerns, and a condensed version of my letter was published in this month’s issue. I believe that when used appropriately, shoshin is of tremendous value to business leaders.  My full letter to the editor (Caitlin Jacobs) provides a more detailed argument than the version of the letter as it appeared in Lubes’n’Greases. I’ve copied and pasted it here.  In the version below, I’ve added a few links to articles that explain shoshin in more detail than I have in my letter. I look forward to reading your comments.

I generally enjoy reading Mr. Goodhue’s Your Business articles in each month’s LNG, but found myself scratching my head while reading his critique of shoshin in his June 2019 offering. His comments made me think of novice mariners failing to recognize that, as important lighthouses are as aides to navigation, their very presence represents a hazard to navigation – follow the line of sight track toward the beacon for too long and you’ll run aground.

No doubt, Mr. Goodhue accurately reported Mr. Fogel’s comment about shoshin. It’s a shame that he didn’t then do a bit of research on the beginner’s mind concept before writing his essay. Prof. Daniel Kahneman, a psychologist who is also Nobel laureate in economics has waxed long and poetic about our tendency to be blinded by preconceptions. In many professions, true experts are able to respond to cues and react appropriately seemingly without thought. Air Force Col. John Boyd canonized this ability as the OODA – observe, orient, decide, act – loop in areal combat. The pilot with the shortest OODA loop wins the dogfight. In Prof. Kahneman’s terms this is “fast thinking.” Malcom Gladwell’s “Blink: The Power of Thinking Without Thinking” is a paean to fast thinking. However, as Prof. Kahneman explains in “Thinking, Fast and Slow,” although the ability to react quickly with limited data is no doubt beneficial in some circumstances, it is not universally so. Snap decisions – used inappropriately – can lead to disastrous results. This often the case when complex issues are being considered.

Developing long-term strategic business plans is one example and root cause analysis is another in which a beginner’s mind is more likely to lead to success. As explained by D. T. Suzuki – the Japanese Buddhist scholar largely responsible for expanding western readers’ awareness of Buddhist and Zen thought – the concept underlying shoshin is to strive to become aware of your biases and preconceptions and to – at least temporarily – set them aside when examining an issue. The idea is to adopt an open mind and to avoid drawing conclusions based on preconceptions rather than available, objective information – first observe without judgment (this is the philosophy underlying brainstorming efforts). With a beginner’s mind, one can accept data, ideas, and information without critique – without filtering through the lens of personal bias. Embracing beginner’s mind during the early stages of problem-solving efforts or during the listening phase of conversations makes an individual more receptive to insights they would otherwise miss.

I’ll offer a case study to illustrate my point. In my work with the petroleum retail sector I often hear about filter plugging from clients who would be better advised to report the issue as slow flow. Retail fuel dispensers are set to deliver product at a maximum flow rate of 10 gpm (40 L/min). Although there are typically at least six different phenomena that can individually cause, or collectively contribute to, reduced flowrate, too many retail site operators assume that slow flow is a symptom only of filter-plugging. A shoshin approach would have stakeholders focus on the objective reality – reduced flowrate. And to ask beginner’s mind questions, such as: “What are all of the things in a retail fuel system that can contribute to flowrate reduction?” Note here, no one is asked to discard their previous knowledge or experience. They are only asked to set them aside in order to see the actual situation more clearly. By understanding that premature filter plugging is only one of several phenomena that cause flowrate reduction, stakeholders are better able to develop a cost effective plan to minimize both the risk and impact of fuel dispenser slow-flow (The opportunity cost of flowrates <8 gpm at an urban fuel retail site is >$250,000 per dispenser per year at a site with 12 dispensers, that per dispenser cost translates to $3 million lost fuel sales opportunity. Beginner’s mind thinking could mean $millions in increased revenue).

I fully agree with Mr. Goodhue. “Achieving shoshin would be difficult for most business people or anyone else more than three years old.” So is metadata analysis. The difficulty of achieving shoshin should not discourage either technical or managerial folks from cultivating the skill. The return on effort and investment in cultivating a beginner’s mind can be enormous when the mindset is used appropriately.

In May 2018, ASTM Subcommittee E34.50 on Health and Safety Standards for Metal Working Fluids commissioned a new Task Force (TF) to develop a new Standard Guide for Evaluating Water Miscible Metalworking Fluid Foaming Tendency. Justin Mykietyn, of Munzing, is chairing the TF and the work is being completed under ASTM Work Item 64558. The details are explained in an article that appeared in the August 2019 issue of Lubes’n’Greases magazine, pages 30 to 32. To learn more about the challenges to predicting metalworking fluid foaming tendency in end-use applications, read the article available electronically at ASTM Drafts Guide to Fight Foam.