The folks at Dixon Pumps dixon@dixonpumps.com routinely send out broadcast emails about fuel system maintenance. Today’s article was inspired by their 31 October 2019 email: Water Removal Basics, by Patrick Eakins. After the fourth paragraph, Mr. Eakins has an action list. The first action he recommends is:

“1. Determine the volume of phase (e.g. free water, ethanol) at the bottom of the tank. This can be accomplished by using a fuel sampler. First take a sample on the very bottom of the tank, then at 1-inch increments until you determine where the phase ends and the fuel begins.”

The phrase: “using a fuel sampler” caught my attention and will be this article’s focus. Spoiler alert: In Fuel Microbiology Part 30, I wrote about fuel system sampling. In this article be covering some – but not all – of the same material.

The Dixon Pump article advises folks to use a sample but makes no mention of what kind of sampler is best for determining the height of free-water (or phase-separated ethanol and water) in underground storage tanks. The problem with an open statement like this is that the samples obtained by different types of samplers tell different stories.

The Bacon bomb is probably the best, currently available bottom sample. Part 30, figure 2a shows a photo of a chrome-plated Bacon Bomb sampler. Figure 1, is a photo of a Bacon Bomb with a clear, polymeric cylinder (the cylinder is the sampler’s primary container). To make it easier to clean, the cylinder is threaded at each end so that the cap and bottom can be removed. The cap and plunger each have a hole for inserting a ring clip. To facilitate lowering and retrieving the sampler into tanks, a sounding tape can be attached to the cap’s ring. A secondary line can be attached to the piston’s ring for sampling above the tank’s floor (when the sampler is at the desired depth, the secondary line is pulled for approximately 30 sec to allow the sampler to fill. It is then released so that the piston is sealed against the sampler’s inlet). 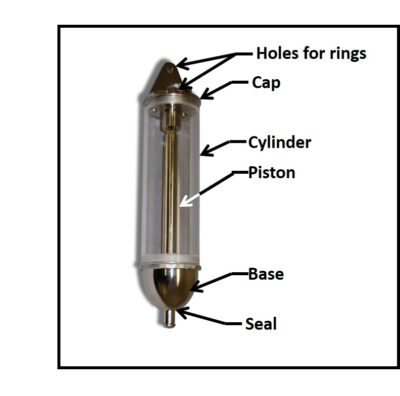 Figure 2 illustrates what happens when a Bacon Bomb sampler is used to collect a bottom sampler. The piston rests against the sampler’s inlet as it is lowered through the fuel column (figure 2a1 and 2b1). When the piston contacts the tank bottom, it is pushed up to open the inlet (figure 2a2 and 2b2). Hydrostatic pressure from the fuel column forces fluid into the sampler. When the Bacon Bomb is lifted off of the tank bottom, the piston will drop back into place – sealing it closed with the sample retained inside the cylinder. If there is no water or sludge present, the sampler will fill with fuel (figure 2a3). However, if bottoms-water is present, it will be the first fluid to enter the sampler. Thus, if there was 500 mL or water, and the Bacon Bomb’s capacity was 500 mL, the sample would be all, or nearly all water (figure 2b3). This would not be an accurate means for estimating the tank’s water level. 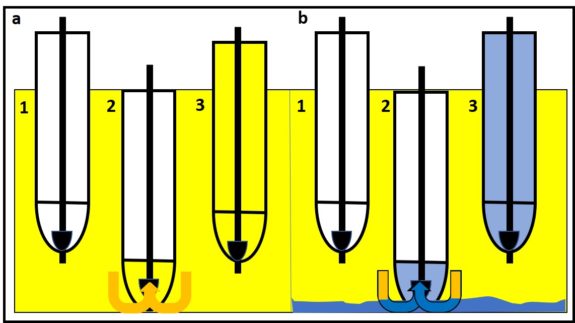 Fig 2. Bottom sample collection using a Bacon Bomb sampler. a) No water on tank bottom: 1) as sampler is lowered through fuel, the piston’s seat rests against the sampler bottom’s inlet, preventing fluid from entering; 2) when the piston touches the tank bottom and sample continues to fall, the inlet is opened and fluid enters – driven by the force of the fuel column’s hydrostatic pressure; 3) as the sampler is lifted off the tank bottom, the piston once again falls to reseal the sampler’s inlet – retaining the sampled fluid. b) Bottoms-water present: 1) same as a1; 2) any bottoms-water and sediment are pushed into sampler before any overlying fuel can enter; 3) same as a3, but now sampler is filled with water instead of fuel.

What does this mean in practical terms? Take a look at figure 3. Three, 500 mL Boston round bottles were filled from Bacon bomb samples collected from a tank bottom. The first sample (figure 3a) captured 450 mL bottoms-water and 50 mL of diesel fuel. If this had been used to estimate the water level, one might have concluded that the tank bottom was covered with a 5 in (13 cm) high water-layer. All 490mL of 500 mL from the second Bacon bomb sample (figure 3b) was bottoms-water. Was there actually 6.7 in (17 cm) of bottoms-water? The third sample (figure 3c) was mostly fuel. Three successive Bacon bomb samples from the same spot were sufficient to pull most of the water out of the tank. Water paste had shown that at the fill-end, the tank had 0.5 in (1.2 cm) of water. 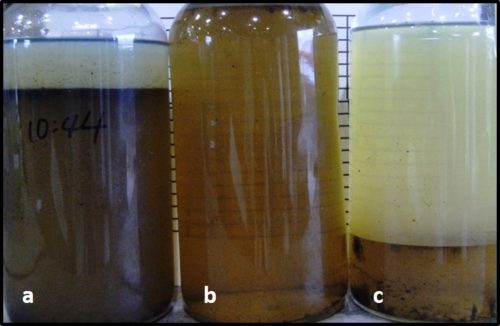 Fig 3. Three successive Bacon bomb samples form one sampling point. A, b, and c were the fist, second, and third samples, respectively.

Bailer samples are normally used to collect fluids from monitoring wells. Figure 4a illustrates how monitoring wells are placed around underground storage tanks. Note that the bottom of the well is porous and at a depth below the water table. After sample collection, the contents of the bailer sampler are layered – reflecting the layering of fuel over ground water in the well (figure 4b – normally the sampler will contain only water). Figure 4c shows the primary components of a bailer sampler. There are numerous bailer designs. For sampling fuel tank bottoms, the sampler must be fabricated form fuel-compatible materials. Also, as shown in figure 4c, the bailer should have a flat bottom. 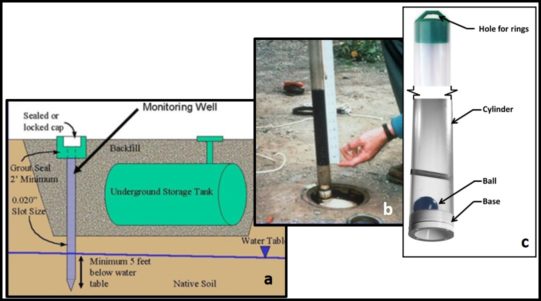 To collect bottom samples, the bailer is slowly lowered through the fuel column (figure 5a1 and 5b1) until it stands vertically on the tank floor (figure 5a2 and 5b2). Because it is not sealed as it descends through the fluid, it analogous to collecting a soil core sample (figure 6). Most bailer samplers have a ball that floats inside the cylinder as the sample is lowered, then settles to the base and seals the inlet as the sampler is raised (figure 5a3 and 5b3). As shown in figure 5c, just as with a soil core sample, the bailer sample reflects the profile of water, rag layer, and bottom fuel much as they are layered in the tank’s bottom. There is typically ∼0.25 in (∼1 cm) between the bailer’s bottom and the inlet. Consequently, bailer samplers are not good for collecting bottom sludge and sediment samples. However, they are useful for estimating bottoms-water height. The tank from which the figure 5c sample was taken had ∼3.5 in (∼9 cm) bottoms-water and 0.75 in (1.9 cm) thick rag layer. The water height in the sampler agreed well with that determined using water paste.

Fig 5. Bottom sample collection using a bailer sampler. a) No water on tank bottom: 1) as sampler is lowered through fuel, ball floats above sampler inlet; 2) when sampler comes to rest on tank bottom, the ball sinks to the inlet; 3) as the sampler is lifted off the tank bottom, the ball seals the sampler’s inlet – retaining the sampled fluid. b) Bottoms-water present: 1) same as a1; 2) water fills the sample to the level of bottoms-water in the tank; 3) same as a3, but now sampler has fuel over water; c) fuel tank bailer sample. 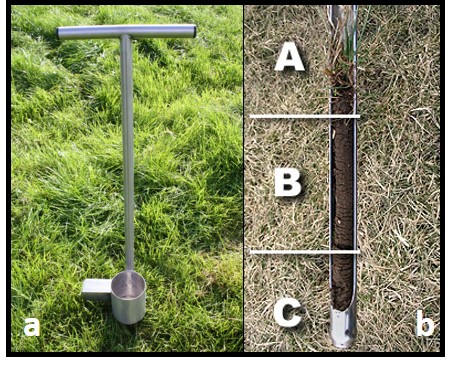 ASTM Practice D4057 describes other fuel samplers. However, none of these are useful for collecting true bottom samples.

As I explained in my previous fuel microbiology post, the best way to determine bottoms-water height is by coating either a sounding sick or bob with water paste and lowering it into the tank. The water will react with the paste to change its color. Because tanks are rarely level, best practice is to test for water at two – preferably three- points: fill end, ATG (automatic tank gauge well, and fill end).

For more details about fuel tank bottom sampling and water accumulation determination, please contact me at either fredp@biodeterioration.control.com or 01 609.306.5250.