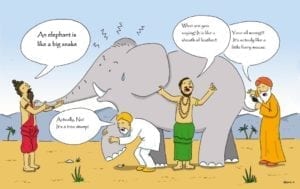 In September, I attended two conferences; each of which included a half-day, fuel microbiology session. Although most of the folks presenting fuel microbiology papers were onboard for both conferences, the information overlap was minor. My overall take home lesson is that when it comes to fuel microbiology, we are all still like the five blind men attempting to describe an elephant (if you are not familiar with this ancient, Indian parable, I invite you to look it up).

Although it has been more than 120 years since the first peer-reviewed paper about fuel biodeterioration was published, there is still much we do not understand. The papers presented at the International Biodeterioration and Biodegradation Society (IBBS17) conference during the week of 04 September and the International Conference on the Stability and Handling of Liquid Fuels (ICSHLF15) the following week shed new light on old questions. At the same time, they highlighted the need for more research.
In a nutshell, in my decades of investigating fuel system biodeterioration, I have often detected substantial microbial communities in tanks that showed no evidence of damage. Just as often, I’ve detected considerable damage in systems that seemed to have negligible microbiological contamination. We might just be getting to the point where we can reasonably investigate why some populations cause damage and others don’t. I’ll get to that in a bit.

I had the honor of being the keynote speaker, kicking off the IBBS17 session on fuel microbiology. My presentation focused on just how critical sampling is if microbiology data from fuel systems is going to be either relevant or meaningful. During the session, Prof. Joe Suflita (University of Oklahoma) presented the results of studies he and his team have done on microbiologically influenced corrosion (MIC) caused by anaerobic bacteria (anaerobes are microbes that grow only when there is no oxygen present). His two take-home lessons were:
1. Anaerobes growing in seawater-ballasted diesel tanks cause MIC; and
2. The fuel’s sulfur concentration (HSD to ULSD) does not affect, microbial growth, fuel biodeterioration, or MIC risk.

Next, Dr. Oscar Ruiz (Air Force Research Lab – AFRL, Dayton) summarized his recent work on genomic (techniques that profile microbial communities, based on the types of genetic material present and the relative abundance of each unique type of microbe – based on its unique genetic profile – in a sample) and metabolomic (techniques that determine which genes are turned on and which are turned off) testing of fuels and fuel-associated waters. Per my comment earlier in this post, it’s not unusual to detect heavy contamination, but not see evidence of biodeterioration. I suspect that as metabolomic testing becomes more practical to run on lots of samples, we will gain a critical understanding of the triggers that cause some microbial populations to cause damage and other to be benign. As an aside, I’ll note here that understanding these triggers has become a major focus of human and animal disease research. More often than previously understood, we get sick when microbes on which we normally depend turn rogue. The next great leap in microbiology will be to understand what genetic switches are turned on or off. After that, the key will be to learn what triggers these switching actions. I am very excited about the work that Dr. Ruiz is doing at AFRL.

Mr.Graham Hill (ECHA Microbiology, Ltd.) reviewed his Energy Institute sponsored work on the relationship between water and microbial contamination levels in biodiesel blends. Graham and his colleagues looked to the effect of fatty acid methyl esters (FAME) on dissolved, dispersed, and free water. Importantly, they found a critical relationship between dispersed and free water, and bioburdens. Microbial loads did not increase as dissolved water concentration increased. Only once fuel-associated water became biologically available, did bioburden increase. These results weren’t surprising, but it is always great to see hard data that support conventional wisdom.

Prof. Ji-Dong Gu (University of Hong Kong) shared some of the work he had done as a post-doctoral fellow at Harvard, in the early 1990’s. This U.S. Air Force sponsored research is still the most comprehensive study of fiber-reinforced polymer (FRP) biodeterioration that has been published (Prof. Gu has several peer-reviewed papers covering this work; several years ago, the Fiberglass Tank and Pipeline’s attorney demanded that I remove all reference to FRP biodeterioration from the BCA website www.biodeterioration-control.com). Prof. Gu’s research demonstrated that a diverse range of polymers and fibers (including several that had biocides blended into the polymer) were susceptible to biodeterioration. He showed a number of very elegant electron microscope images that illustrated the attack mechanism. He also presented electrical impedance data that demonstrated that FRP lost structural strength as biodeterioration progressed.

Dr. George Dodos (Technical University of Athens) presented data demonstrating that FAME composition affected both the rate and specific nature of biodiesel (B5) biodeterioration. His work built on previous studies that showed similar results. Biodeterioration is more rapid when FAME molecules have more carbon-to-carbon (C=C) double bonds (this is called: degree of unsaturation). Dr. Dodos’ research focused on examining the chemical changes that occurred in different biodiesel blends. Publications of this sort of corroborative research is essential to scientific progress.

Prof. Egemen Aydin (Istanbul University) wrapped up the IBBS17 fuel microbiology session with his paper on the biodeterioration of water-soluble molecules in navy fuels. As many readers know, the refining processes used to produce LSD and ULSD adversely affect fuel lubricity, oxidative stability, and corrosivity. Although they are primarily fuel-soluble, additives used to restore these properties have some water solubility. Consequently, they are nutrients for microbes growing in fuel-associated water. Prof. Aydin’s presentation illustrated how water-soluble fuel molecules can stimulate bioburden development and biodeterioration.

ICSHLF15 followed immediately on the heels of IBBS17. As I noted above, many of the same actors attended and presented papers at both conferences. I’ll only mention the presentations that were unique to the ICSHLF15 fuel microbiology session.
Dr. Giovani Cafi (Conidia Bioscience, Ltd.) presented research being done at Conidia using genetic tools to detect and quantify anaerobic microbes in fuels and fuel associated waters. As I noted, apropos of Prof. Suflita’s IBBS17 presentation, except for sulfate reducing bacteria, historically, anaerobic microbes in fuel systems have been largely overlooked. Dr. Cafi reported that anaerobes are commonly part of the fuel microbiology community. Clearly, more research is needed to better understand what anaerobes are present and how they contribute to both product and system biodeterioration.

Mr. Gareth Williams (EHCA Microbiology, Ltd.) discussed EHCA’s recent investigations in which they compared the results of different fuel microbiology test methods. Not surprisingly, Mr. Williams reported that culture tests do not covary strongly with non-culture tests. As I discussed in my December 2015 blog post (https://biodeterioration-control.com/microbial-damage-fuel-systems-hard-detect-part-3-testing/), any single culture test is unlikely to detect >0.1 % of the different types of microbes present in a fuel or fuel-associated water sample. Put another way, the culture tests typically used for routine condition monitoring are 99 % likely to miss microbes that are present in samples, but won’t grow in the nutrient recipe used to manufacture the culture test kit. Unfortunately, as a manufacturer of culture test kits, ECHA presents methods comparisons as though culture test data represent a gold standard for microbiology testing. Conversely, in my own experience, I have routinely detected heavy microbiological contamination by non-culture methods in samples that appear to be microbiologically clean, based on culture test results. Interestingly, the ECHA data set indicated that ATP data obtained using a method other than ASTM D7687 appeared to have no relationship to other measures of microbial loads.

In addition to the oral presentations there were several noteworthy ICSHLF15 posters that addressed fuel microbiology issues.
Dr. Joan Kelly (Conidia Bioscience, Ltd.) presented the results of a survey that she and her collaborators performed on microbial contamination in U.S. retail site UST. The team collected samples from UST across two states. Not surprisingly (to me), Dr. Kelly’s team detected moderate to high levels of microbial contamination in most of the sampled UST.

Dr. Marlin Vangsness (University of Dayton Research Institute) presented a poster reporting bioburden in bulk storage tanks. Dr. Vangsness reported that most sampled tanks had moderate to heavy microbial contamination. Moreover, he reported that ATP data obtained using ASTM D7463 did not correlate with other microbiological parameters. Having spent 30 years working to separate interferences that had historically made ATP testing unusable for complex, organic chemical rich fluids like fuels and lubricants, I have argued that ASTM D7463 is an unreliable test method. D7463 does not separate water-soluble organic chemicals and salts from microbes in the test specimen. Consequently, ASTM D7463 results are subject to both positive (high values caused by chemical reactions) and negative (low values caused when chemicals in samples capture the light that is generated by the test reaction – see https://biodeterioration-control.com/microbial-damage-fuel-systems-hard-detect-part-14-test-methods-still-microbiological-tests/ – before the light reaches the detector) interferences. Dr. Vangsness’ poster and Mr. Willams’ presentation both corroborate findings that National Research Defense Canada presented at a NATO conference, nearly a decade ago. In contrast to ASTM D7463, ASTM D7687 (see the previous hyperlink) effectively separates interfering chemicals from microbes before extracting ATP.

Speaking of ATP, Ms. Chrysovalanti Tsesmeli, a doctoral candidate at the Technical University of Athens, presented a poster reporting her use of ASTM D7687 and chemical analysis to explore the effects of FAME and hydrogenated vegetable oil (HVO) on marine diesel fuel biodeterioration. Her work showed that HVO-blended fuels were more biostable than FAME-blended fuels.
Last, but not least, Ms. Silvia Bozzi (Chimec S.p.A.) presented a poster that was similar to Dr. Kelley’s. Ms. Bozzi reported on a survey of retail UST in Italy. As in the U.S., the incidence of moderate to high microbial contamination levels in Italy’s retail site UST is considerably greater than generally recognized by site owners and operators.

One of the particularly gratifying aspects of both conferences was the number of young (i.e. under the age of 40) researchers who are investigating fuel microbiology. These young scientists are applying new techniques to ask new questions and to obtain answers that we cannot get using traditional microbiology methods. Moreover, often the young researchers come from non-microbiology disciplines. Because this reflects a multidisciplinary approach to fuel and fuel system biodeterioration it bodes well for the future of fuel microbiology.
Although I didn’t mention any posters or presentations made by Prof. Fatima Bento or her graduate students, I’ll close this blog with a special call out acknowledging the great research being done by this group at Instituto de Ciências Básicas da Saúde, Sao Paulo, Brazil. Few months pass when I don’t have an opportunity to review manuscripts submitted by members of Prof. Bento’s team. They have made many important contributions to our understanding of ULSD and biodiesel biodeterioration. I’d be sorely remiss if I didn’t mention their fine work.

As always, if you’d like to learn more about fuel and fuel system microbiology testing, please contact me at fredp@biodeterioration-control.com.