WHAT ARE BIOFILMS AND WHY DO THEY MATTER? PART 1 – BIOFILM FOUNDATIONS 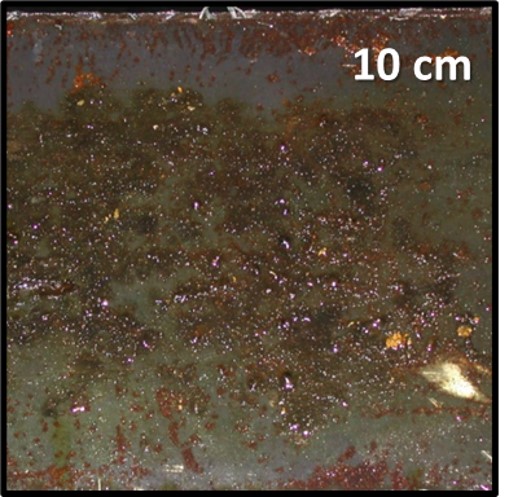 ASTM1 defines biofilm as a noun: “microorganisms living in a self-organized community attached to surfaces, interfaces, or each other, embedded in a matrix of extracellular polymeric substances of microbial origin, while exhibiting altered phenotypes with respect to growth rate and gene transcription.” The ASTM definition adds: “Biofilms may be comprised of bacteria, fungi, algae, protozoa, viruses, or infinite combinations of these microorganisms. The qualitative characteristics of a biofilm, including, but not limited to, population density, taxonomic diversity, thickness, chemical gradients, chemical composition, consistency, and other materials in the matrix that are not produced by the biofilm microorganisms, are controlled by the physiochemical environment in which it exists.”

There are quite a few complex terms used in this definition. In today’s article, I’ll unpack the definition and explain why people involved with industrial fluid or system management should pay attention to biofilms.

If you have been reading my What’s New articles, you already know what microorganisms are. They are organisms that are too small to be seen without the use of a magnifying device such as a microscope (Figure 1). Here’s a quick refresher (all definitions are for plural terms and are quotes from ASTM terminology standards): 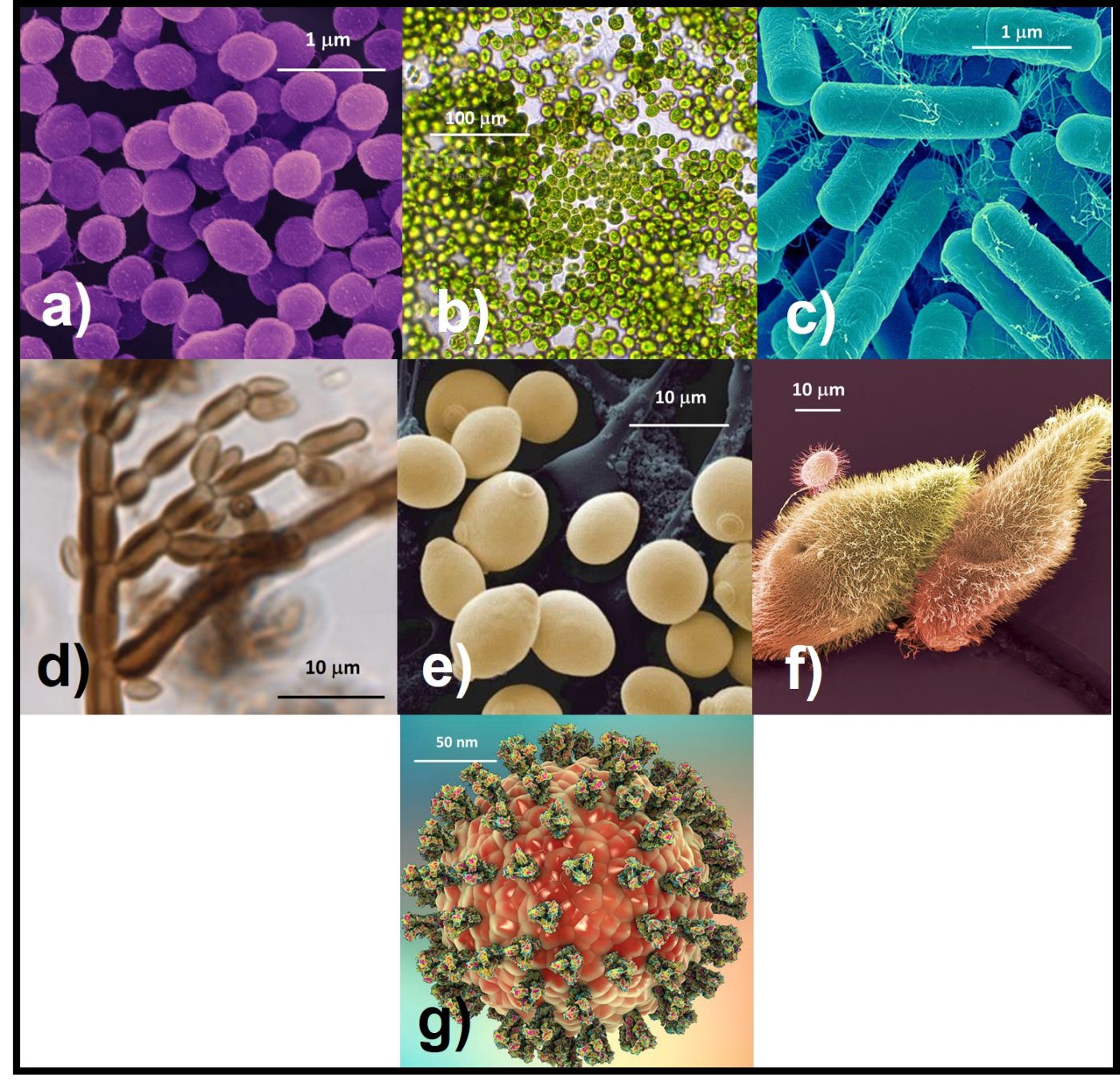 A self-organized community is one that forms due to the activities of its members. As I’ll explain in more detail below, biofilms are complex creations that are quite similar to multi-cellular organisms such as sponges and all higher organisms. The shape and function of each cell within the biofilm matrix is affected by chemical signals it receives from other cells.

A matrix is the set of conditions that provides a system in which something grows or develops. A biofilm matrix is a complex mixture of biomolecules, including genetic material (deoxyribonucleic acid – DNA – and ribonucleic acid – RNA), peptides, lipids, carbohydrates, and other large molecular weight molecules. This mixture is called extracellular polymeric substance (EPS). Originally (when I was an undergraduate investigating biofilm development on cave steam surfaces) biofilms were thought to be homogeneous surface coatings – not unlike a uniform layer of slimy paint. Now we understand that the EPS matrix is structurally complex. As Figure 2 illustrates, within the biofilm’s EPS matrix there are cell-dense and cell-free zones. Additionally, channels provide for nutrient and metabolite flow within the biofilm. Biofilms release cells into the bulk fluid by two mechanisms. Passive release occurs due to the erosive effects of fluid flowing over the biofilm. However, biofilm communities can also release cells actively. Planktonic microbes released from biofilms can settle on downstream surfaces and pioneer the creation of new biofilm communities. Some zones within the biofilm are tightly packed with microbial cells and others are cell deserts – with no cells visibly present. 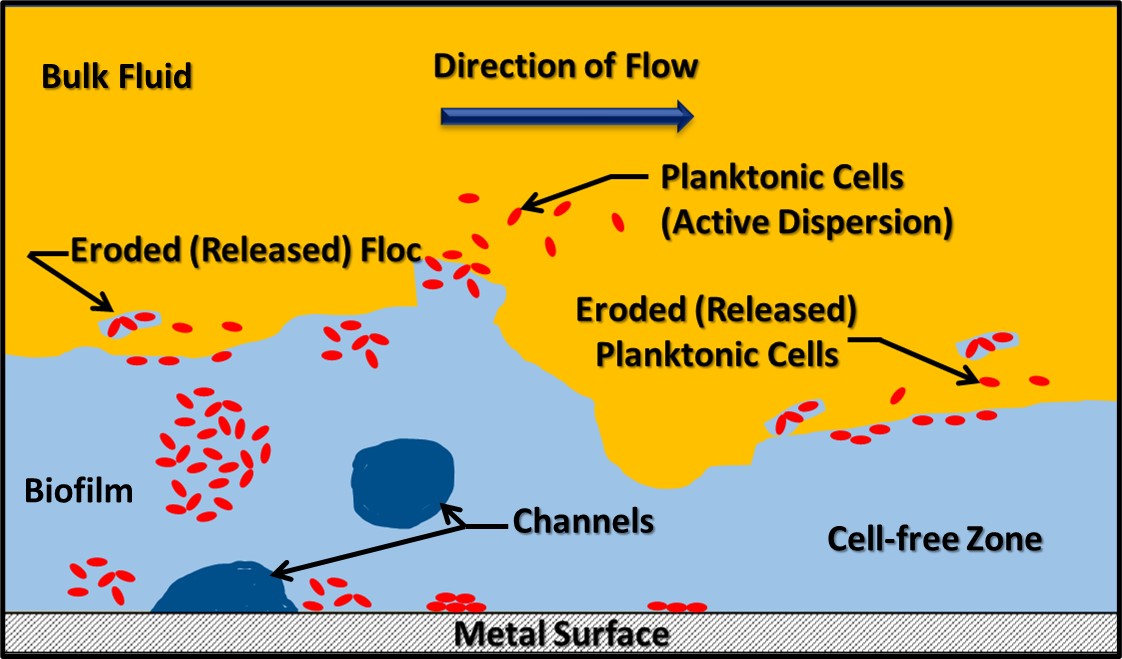 Fig 2. Biofilm schematic. Red shapes of microbial cells. Light blue area is the EPS. Dark blue areas are channels, and yellow area is the bulk fluid flowing over he biofilm.

The process of biofilm development has been well studied. Bacteria with specialized external structures called attachment pili are attracted to substrate surfaces (for example, metal or concrete surfaces) by electrostatic and other forces (Figure 3a). This is called the attachment phase, or Stage I, of biofilm development. During Stage II (the growth phase), these pioneering bacteria replicate and start producing EPS (Figure 3b). In many environments, a mature biofilm (Stage III; Figures 2 and 3c) can develop within 24 h to 72 h. The population in a mature biofilm can consist of a single type of microbe (operational taxonomic unit – OTU – or genotype), when the microbes in the EPS matrix are genetically identical (i.e., monoclonal), or diverse OTUs. 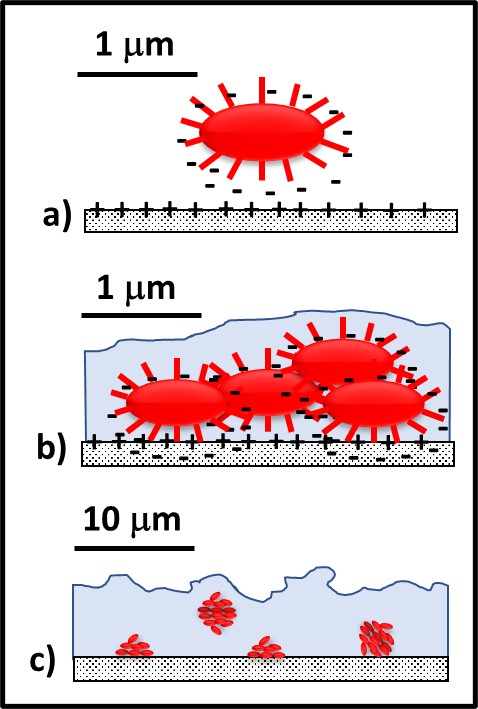 Fig 3. Biofilm development – a) pioneer bacteria with attachment pili are attracted to surfaces by various electrochemical forces; b) after attaching to surfaces, pioneer bacteria reproduce, and excrete adhesive polymers and EPS; c) with a few days, the mature biofilm has formed.

Microbes within the biofilm form a consortium. They signal to one another by secreting and sensing various types of biomolecules. This molecular communication among cells is quite sophisticated and resembles the kind of intercellular communication that takes place among cells in multicellular organisms ranging from sponges to humans.

A phenotype is a set of an organism’s observable characteristics resulting from its interaction of its genotype with the environment. Just as the appearance and function of human cells depend on their location (e.g., skin cells, liver cells, muscle cells, etc. – all of which vary based on the organ of which they are part and their location within the organ – think of the many different cell phenotypes in an eyeball!), the appearance and function of microbial cells can vary with their immediate environment. Nearly 20 years ago, researchers at the Montana State University’s Center for Biofilm Engineering (Center for Biofilm Engineering – Center for Biofilm Engineering | Montana State University) placed a single bacterial cell onto a glass surface and watched as it reproduced and created a biofilm consortium. The researchers found that both the shape (morphology) and physiological characteristics (nutrients the cell can consume and waste products it excretes) of a single genotype depended on cells’ locations within the biofilm matrix. Reiterating my earlier comment: think of biofilm consortia as being among the earliest multicellular organisms. It is likely that early reports of biofilm microbial diversity included incorrect assessments based on phenotypic differentiation among cells. The biofilm literature now includes descriptions of both monoclonal and genetically diverse biofilm consortia.

Confused yet? Microbes living in close proximity are exceptionally promiscuous. They can exchange both chromosomal and extrachromosomal DNA. Chromosomal DNA is the DNA contained in the threadlike structure that contains the organism’s genes which, in turn, define its genotype. Plasmids are strands of DNA that are not part of a cell’s chromosome. Plasmids can replicate independently of the chromosome. They can be present inside cells or in the EPS matrix. When plasmids from the environment enter cells, the process is called transfection.

Bacterial can transfer both chromosomal DNA and plasmids through conjugation pili. This process is called conjugation. Figure 4 illustrates the conjugation process. After the plasmid replicates inside one cell (Figures 1a and 1b), it can be transferred via a conjugation pilus (singular form of pili) to another cell (Figures 1c, through 1e). At the end of the process, both sells have the plasmid (Figure 1f). Plasmids are an essential tool for genetic engineering. In nature, they are the primary means by which properties such as microbicide resistance are transferred among cells. 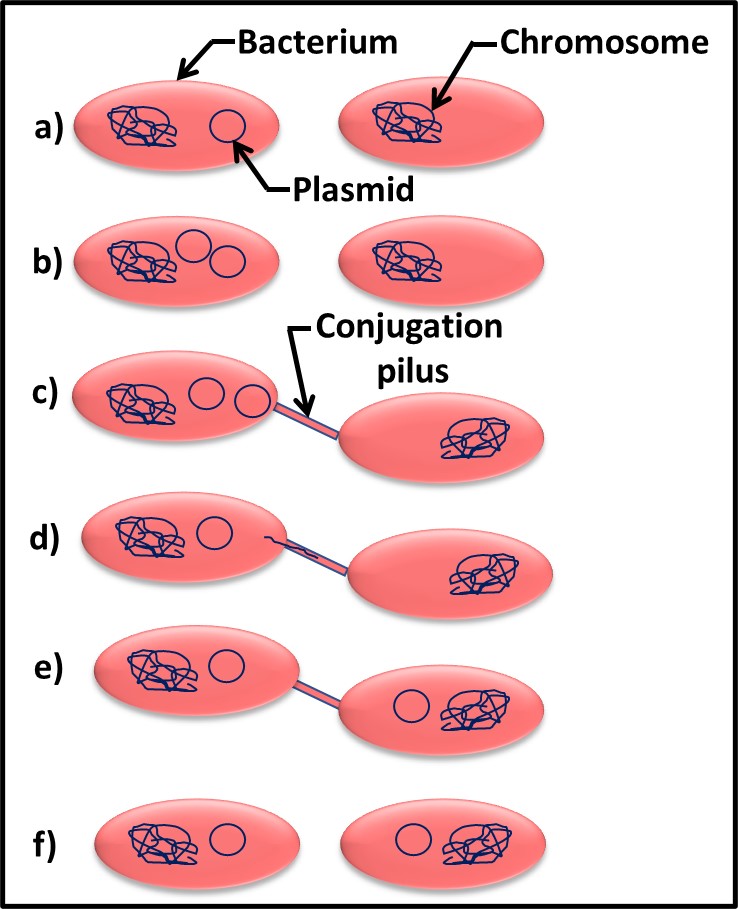 Gene transfer among biofilm consortium cells is one of several communications mechanisms. Additionally, it is a process that spreads adventitious genes (such as microbicide resistance) among members of the biofilm community.

My next What’s New article will expand on how biofilms contribute to biodeterioration problems. In the meantime, if you have any questions about the information in this post, don’t hesitate to contact me at fredp@biodeterioration-control.com.