In August, I discussed the concept of attribute score agreement between two test parameters. Before continuing to the next part of my discussion, I’ll use a Venn diagram to further illustrate this concept. Figure 1 shows the respective data sets obtained by two test parameters – ATP-bioburden and culturable bacterial bioburden (bacterial CFU mL-1). The blue and red circles, respectively, represent the ATP and culturable bacteria data sets. The green zone is the region in which the data from the two parameters agree. In this illustration, the green zone indicates that there is 81 % agreement between the two parameters (these data are from a 2015 study that compared metalworking fluid data obtained from ASTM Test Method E2694 and those obtained by culture testing). Generally speaking, >70 % agreement is considered to be excellent. However, the decision to accept data based on one parameter as a proxy for data based on a different parameter is ultimately a management decision.

As I have stated repeatedly in my previous What’s New articles, all microbiological test methods have both advantages and disadvantages relative to other methods. Generally speaking, I personally prefer fast, accurate, and precise molecular microbiological methods (MMM) such as ATP by ASTM Test Methods D4012, D7687, and E2694, over culture testing for field surveys (BCA’s Microbial Audits) and condition monitoring, but prefer culture test methods when I am trying to isolate and characterize specific microbes.

Extinction dilution testing is performed to assess a test method’s linearity along a range of values, its limit of detection (LOD), and its limit of quantification (LOQ). Both LOD and LOQ are indicators of tes method sensitivity. Sensitivity increases as LOD and LOQ decrease. Figures 2 and 3 illustrate these three aspects of test data. In Figure 2, light absorbance at 620 nm (A620nm) is plotted as a function of Log dilution factor (Log DF).

The LOQ, is the lowest concentration at which the test method gives a signal that is statistically different from the test results obtained with blank control specimens. In Figure 3, A620nm cannot detect cells present at densities <2.8 Log cells mL-1. The LOQ is the level above which results can be reported with some level of confidence. Typically, the LOQ = 10x the standard deviation of replicate test results obtained at the LOD. Table 1 shows the results of five replicate A620nm tests run on specimens from the 8.5 Log DF. The standard deviation (s) is 0.008. Therefore, the LOQ for A620nm = 0.08 (per Figure 3, this correlates with 3.4 Log cells mL-1).

When test results are greater than the maximum value within the linear range, the sample should be diluted as needed so that the results are within the range. For example, for culture testing, the LOQ is 30 colonies per 100 mm diameter Petri dish. Optimally, counts between 30 and 330 colonies (i.e., reported as colony forming units – CFU) are used to determine CFU mL-1. Petri plates with more than 330 colonies are typically reported as too numerous to count – TNTC, or confluent (when colonies for a continuous lawn) as illustrated in Figure 4. Two colonies on a plate (Figure 4a) is >LOD but 1010 CFU mL-1. In both cases, 109 or 1010 dilution factors were needed to obtain plates with 30 to 300 colonies. 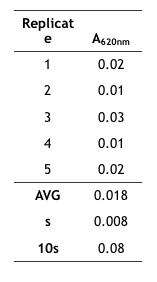 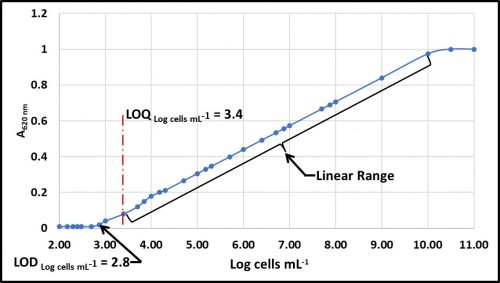 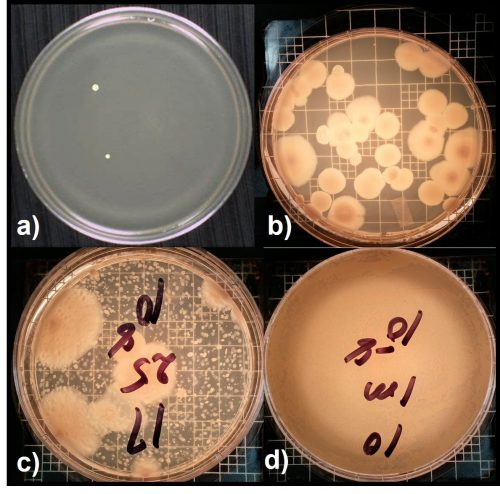 Fig 4. Bacterial colonies on nutrient media in Petri plates – a) 2 CFU – the number of CFU > LOD but < LOQ; b) 42 CFU – the number is > LOQ and within the recommended range for counts per plate; d) TNTC – although the number of CFU per 1 cm x 1 cm square can be counted and used to compute the CFU per plate, this practice is not recommended; d) confluent growth the margins of individual colonies have merged to form a confluent lawn.

Dilution series – When comparing two different microbiological test methods such as culturability (CFU mL-1) and ATP-bioburden ([cATP] pg mL-1), we are interested in correlation (i.e., the correlation coefficient (r)) or agreement. However, this correlation curve should not be used to assess the respective LOD and LOD of the two methods being compared. Consider an undiluted sample with culturable bacteria bioburden = 108 CFU mL-1 (8 Log CFU mL-1) and [cATP] = 105 pg mL-1 (5 Log pg mL-1). Figure 5 shows that the correlation coefficient between the two parameters is 1. However, the ATP test method LOD appears to be three orders of magnitude greater than that for the culture test – i.e., the culture test seems to be three orders of magnitude more sensitive than the ATP test. 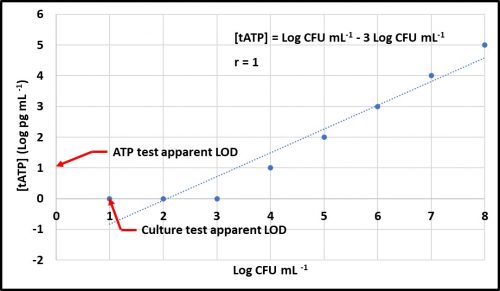 However, the apparent insensitivity of the ATP test is an artifact of the test protocol. One should expect to recover CFU in the 107 or 108th dilutions of a sample with 108 CFU mL-1 in the original sample, but to be unable to detect ATP at dilutions >105.

Field samples – when field samples are used to compare two parameters, the data provide a more accurate indication of their relative sensitivities. In figure 6, data are shown for undiluted samples tested for [tATP] and culturable bacteria recoveries. Now it is apparent that the ATP parameter is able to detect bioburdens that are below the LOD for the culture test method. I’ll not here the LOD and LOQ for culture tests can be lowered by using membrane filter methods. Membrane filtration protocols start with filtration of 10 mL to 1,000 mL of sample. For a 1,000 mL sample the LOD is 0.001 CFU mL-1 and the LOQ is 0.03 CFU mL-1. Similarly, the sensitivity of filtration-based ATP tests can be increased by increasing the volume of specimen filtered. Sensitivity can also be increased by using more concentrated Luciferin-Luciferase reagents. 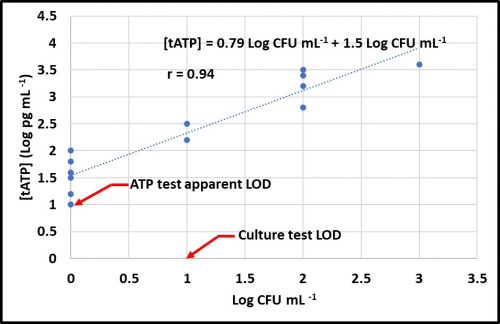 Dilution curves like the one shown in Figure 5 are appropriate to assess whether two parameters correlate with one another but should not be used to compare their relative sensitivities. Twp parameter test result comparisons from field samples – as illustrated in Figure 6 – are suitable for assessing both correlation and relative sensitivity. In my next article I’ll explain how to use apply test method comparison data to set control limits.